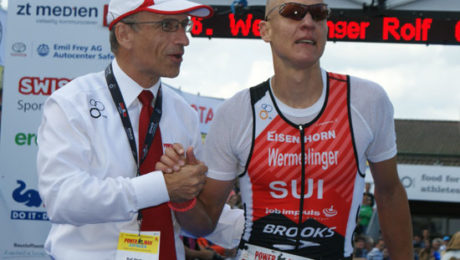 Zufrieden mit der bisherigen Saison/are you satisfied with this season so far?
Meine bisherige Saison war ok. Jedoch konnte ich nicht ganz an meine guten Leistungen der vergangenen Saison anknüpfen. Dies lässt sich so erklären, dass ich in dieser Saison weniger Zeit zum Trainieren hatte. In meinem Studium musste ich ein einjähriges Praktikum absolvieren, in dem ich 100 % arbeiten musste./The season so far was okay. On the other hand I wasn’t capable to repeat the good performances from last season. There’s a reason fort hat. In this season I had less time for practising. As a student I had to do a work placement for one year, where I had to work full time. 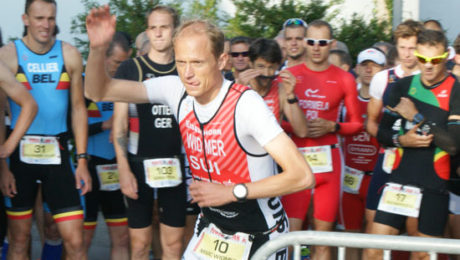 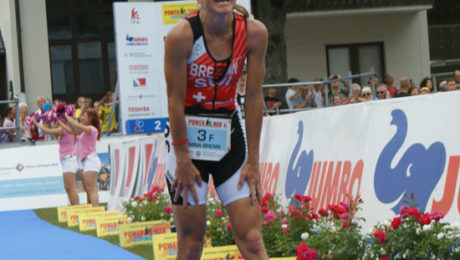 Zufrieden mit der bisherigen Saison/are you satisfied with this season so far?
Ja./yes.

In 2002 he completed his first ever long-distance race at Powerman Zofingen. Ronnie Schildknecht subsequently switched from duathlon to triathlon, winning the Ironman Switzerland in Zurich nine times. On September 2, 2018, the Zurich rider will start on the 30th Powerman Zofingen: He is very much looking forward to the race under the motto “back to the roots”. Schildknecht does not entertain, however, but wants to give himself his present for his 39th birthday on September 19. “I want to be world champion in Zofingen.”

Do you remember the Zofingen race in 2002
?yes, very good! It was a great feeling to be in the front with legends like Oli Bernhard or Stefan Riesen. I immediately became sixth! I’m really looking forward to getting back home now.

Started duathlon, then switched to triathlon, now back to duathlon. For which sport is your heart beating more?
I have always done both and would not want to choose either sport.

You’re also starting at the Ironman in Hawaii, at the unofficial Triathlon World Championship on October 13, 2018, is the short recovery time after the Powerman Zofingen enough?
I don’t know exactly. A sports physiologist would certainly advise against it, but the head also plays a big role. A victory in Zofingen would certainly give a positive boost.

So you will start in Zofingen on 2 September 2018 with a very ambitious goal…
… Yes, a victory would be nice!

Which will be your toughest competitors in Zofingen in the fight for the World Cup crown?
I know Seppe Odeyn and Felix Köhler, both of whom I value very highly.

What does your training currently look like, more focused on duathlon or triathlon?
Despite the upcoming duathlon world championship start in Zofingen, I still swim a lot. But this is even good for duathlon and loosens the legs.

Does the fact that there is a new bike course at the 30th Powerman Zofingen meet with your approval as a returnee?
I don’t know. I knew the old track well and thought it was great.

Do you think you’ll put your real strength to the test on the bike?
That remains to be seen.

Have you inspected the track of the 30th Powerman Zofingen yet?
Yeah, I looked at them. To be honest, I found the old track more beautiful and better to drive. 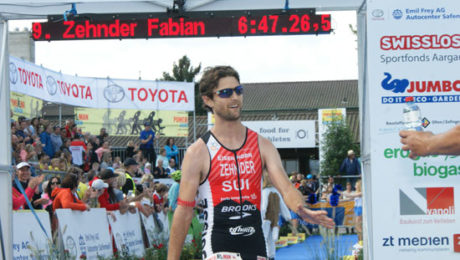 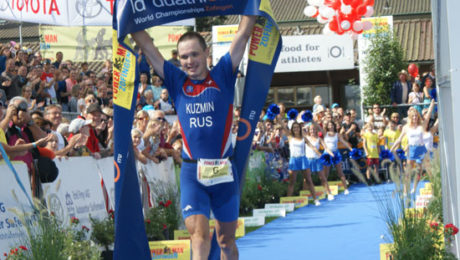 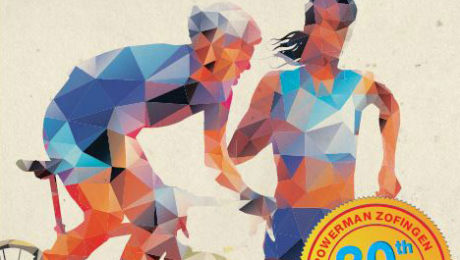 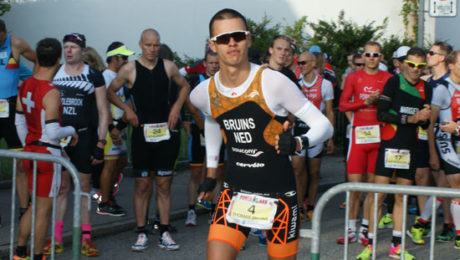 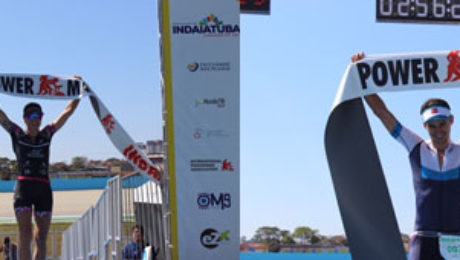 Carol Furriela and Iuri Vinuto were the great champions of Powerman Brasil 2018, the national stage of the world’s longest duathlon circuit, held on a beautiful Sunday in Indaiatuba. With two 10-km race legs interspersed by 60 km of cycling on an extremely challenging course, the duoathletes had to face the sunny and hot weather that made the race even more technical and difficult.
Currently Powerman Brasil champion, Carol Furriela returned to Indaiatuba and had a god strategy to dominate the course from start to finish. In the first leg of the race Carol left the T1 with a small margin of advantage over Giovana Martins and the pedal began to open advantage over its main competitor on Sunday. “I had a strategy in search of the title, I knew that Giovana was going to run very strong, because she is a marathon runner, and it worked.” I fought alongside her in the first round and started cycling” said champion Carol Furriela.
After opening on cycling, Carol kept the distance on the second leg of the race closing 10/60/10 at 3:34:22. Giovana Martins came in second place with just under five minutes difference for the champion and Maria Vângela de Sousa completed the women’s podium in third place. “Powerman Brazil is an incredible test and one that respects the athlete too much. I’m very happy to have come back here and beaten again. Next year I’m going back to get the third championship” concludes Carol Furriela.
In the Men’s the level was also very high with presence of the best athletes of the country. Runner Up in 2017, Iuri Vinuto made several adjustments in his preparation, especially in cycling and managed to leave Indaiatuba with the victory. Iuri led the race from start to finish to celebrate his first title in Powerman Brazil.
Iuri opened the 10km race with a very strong run close 33 minutes next to Antonio Mansur. The two of them left together with advantage of almost three. On the bike Iuri did enough strength and even with partial a little slower managed to keep the difference over Manocchio and Manente. However, it was in the second race that the champion set the race by completing the 10/60/10 at 2:56:20.
“Today was a very hard day, cycling here is very strong and I knew that I had to keep the edge, as Manocchio and Manente cycling very well. I was able to lead from the beginning and very happy with my performance throughout the course “celebrated Iuri Vinuto. Guilherme Manocchio was the second placed, with just over three minutes of disadvantage for the leader, and Felipe Manente came soon in sequence, completing the podium.
Sprint:
Sunday was also the day to meet the Powerman Sprint champions, who comprise half the distance from the Classic, adding two 5-km running legs and a 30-km bike. Also counting on high technical level the race crowned Ernani de Souza and Detlei Hasse were crowned champions. Ernani is an excellent runner and is slowly hitting his duathlon races. On Sunday he was the most consistent during the entire race crossing the finish line with 1:38:51, ahead of Carlos Henrique de Oliveira and Fabio Fantozzi, second and third respectively.
In Women, Detlei showed that she is one of the best duoatletas of the country setting another event for its collection of titles. With 1:56:52, Detlei was the great champion of the Brazilian stage of the Powerman circuit finishing ahead of Elizabeth Berton, runner-up, and Vivian Oliveira, third place.
Power Run:
Closing the Sunday schedule was the Power Run, a 5-km race that had as its main goal to attract more athletes to meet the Powerman spirit. Many families and runners from Indaiatuba honored the event by making the party even more beautiful on the Olympic Velodrome. In the end, dozens of runners joined the duoatletas in an great atmosphere.
Results – Powerman Brasil 2018:
Classic – Women
1ª Carol Furriela – 3:34:22
2ª Giovana Martins – 3:39:18
3ª Maria Vângela de Sousa – 4:11:20
Classic – Men
1º Iuri Vinuto – 2:56:20
2º Guilherme Manocchio – 2:59:34
3º Felipe Manente – 3:00:28
Sprint – Women:
1ª Detlei Hasse – 1:56:52
2ª Elizabeth Berton – 1:59:27
3ª Vivian Oliveira – 2:06:26
Sprint – Men
1º Ernani de Souza – 1:38:51
2º Carlos Henrique de Oliveira – 1:41:03
3º Fabio Fantozzi – 1:42:39
Text: Danilo Caboclo
powermansport
Read more
No Comments