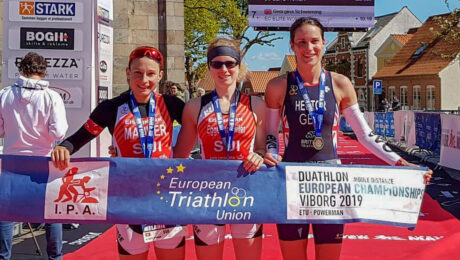 Petra Eggenschwiler and Melanie Maurer fetch gold and silver in Viborg. The two Swiss girls lived up to their role as favourites at the Powerman ETU Middle Distance Duathlon European Championships in Denmark and secured a double victory. The long distance world champion of Zofingen 2018, Petra Eggenschwiler, added another title to her Palmarès in the former Danish capital. Maurer had already won silver last year, defending champion Sandrina Illes (AUT) was fourth behind Brit Alice Hector.

After the first 10 km of running, the two Swiss changed to the bike a few seconds behind Illes and Georgina Schwiening (GBR), the third Swiss, Nina Zoller, followed 30 seconds later. Eggenschwiler quickly took the lead, Maurer and Zoller took the next places. On the second 10 km run, Eggeschwiler’s lead remained practically the same, the Solothurn athlete secured the title with 3:53 minutes ahead of the Bernese Maurer from Wikon/LU. Zoller ranked 9th in the final.

Fabian Zehnder (TG Hütten) was in a group of five athletes after the first run, who only separated by a few seconds. The Swiss was well on his way on the bike. He changed back into his running shoes on the 3rd intermediate position, behind Daan de Groot (NED) and Chris Fischer (DEN). “I had to work a lot on the windy bike course and there were no possibilities (descents) to take a breather,” Zehnder described the “brutally hard” competition. “Unfortunately I still lost my full bottle on the cobblestone, whereby cramps belonged to my constant companion. I had to improvise a little during the rations, which I felt from kilometre 5 on on the 2nd run”, Fabian Zehnder continued. “The
running today was very coupiert and windy, so I lost a lot of time.” Zehnder had been able to hold
position 3 until kilometre 5, after which he dropped back to fifth place. The second Swiss player to start, Jens-Michael Gossauer (Powerlab Rebels), came in 10th. The Dutchman Daan de Groot could not take the title anymore.
Reinhard Standke/Raphael Galliker