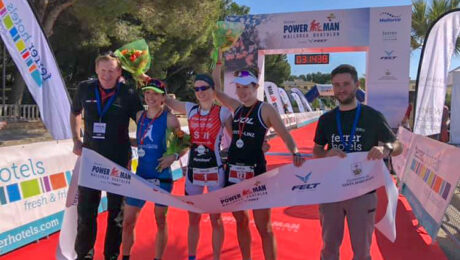 Petra Eggenschwiler is celebrating her first Powerman victory on the Spanish island of Mallorca after winning the world championship title on the 30th Powerman Zofingen. The Solothurn native wins on the holiday island confidently ahead of the two locals Yessica Perez and Margarita Fullana. In the men’s singles, Belgian Diego van Looy wins ahead of French reigning world champion Gaël Le Bellec and Liechtenstein Michele Paonne.

Petra Eggenschwiler, who together with Melanie Maurer had secured the Swiss double victory at the Powerman World Championships in Zofingen last autumn, took the scepter in her hand at the Powerman Spain immediately after the starting signal. Already on the first five kilometres she distanced her four rivals by half a minute and more and extended this lead to a good one and a half minutes until the first change. After the first 15 kilometres on the bike, Eggenschwiler’s lead over Yessica Perez (ESP) was more than four minutes. The Spanish professional cyclist was able to reduce the gap in the course of the bike course, but Eggenschwiler drove too hard to catch up. On the final ten kilometres, the Swiss rider didn’t let anything burn her heart, she was able to extend her lead again and crossed the finish line as the sovereign winner.

Petra Eggenschwiler (in red in the middle) from Solothurn wins the Powerman Spain on Mallorca. 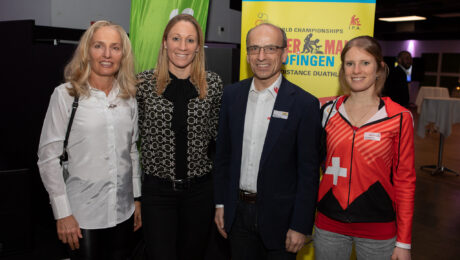 Last year, the cycle route in the canton of Lucerne was almost entirely relocated to Aargauer Boden due to changes in permit conditions. “This has proved very successful and the no less hard bike
course than before will remain the same in the future, except for minor adjustments.” Ruf and his OK team of about 50 people want to get more and more transit communities on board. With the project “12 communities – one race”, mood nests are to be built up along the cycle route. “The Powerman
will also take place throughout the year,” says Ruf, who wants to install a permanent bike race track with time and altitude measurement on the Reitnauer Auto-Bergrennen circuit. “At the moment we are still in the detailed planning stage.”

As guests of honour the Powerman Zofingen could present three true sport queens: Natascha Badmann (six-time Ironman Hawaii winner, two-time Long Distance Duathlon World Champion at Powerman Zofingen and two-time Swiss Sportswoman of the Year (1998 and 2002)), Daniela Ryf
(four-time Ironman Hawaii winner and two-time Swiss Sportswoman of the Year (2015 and 2018) and Petra Eggenschwiler (World Champion 2018 Zofingen ITU Powerman Long Distance Duathlon). “It would be very interesting if these three outstanding Swiss endurance athletes would compete
against each other on the Powerman long distance in Zofingen. Maybe we’ll organize a test
competition especially for this trio”, Ruf was very happy to have these three queens at the partner meeting of the Powerman Zofingen. “I did a few duathlons at the beginning of my career and have great respect for this sport,” said Ryf. “As I’ve heard from Natascha Badmann, the Powerman Zofingen is even harder than the Ironman Hawaii and so I know why I’ve never competed in the Powerman Zofingen before.” Ryf had to reveal a story about Eggenschwiler: “When I crawled up the Grenchenberg with my time trial bike during training, Petra Eggenschwiler came from behind and said hello to me. Then when I told her she could drive on if she wanted to, it did “ping” and she was
gone!” For her part, Eggenschwiler revealed that she had returned to the Zofingen region for the first
time since winning the World Cup last September. “It brings back wonderful memories and I’m already looking forward to the Powerman Zofingen on September 8th, which will be one of my big goals for the season. Badmann enjoys her role as ambassador of the Powerman Zofingen: “There is a lot of good feedback, the people and the media partners are happy and this sport becomes more interesting again. Duathlon was very important in the 90’s, then went diving a bit and when you can lift it again it’s beautiful.” 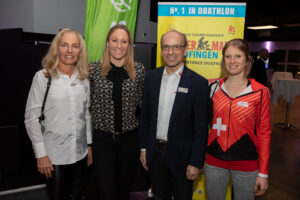 Duathlete of the year

Melanie Maurer, who grew up in Wikon and lives in Bern (Liebefeld), was elected Duathlete of the Year. She is Vice World Champion 2018 Zofingen ITU Powerman Long Distance Duathlon. “I’ve been crying since I was 30 years old, but now I’m so overwhelmed by this choice.” The 31-year-old Fabian Zehnder from Zurich (TG Hütten, Wädenswil) was elected Duathlete of the Year. “This award makes me very proud, of course, but I would have preferred to finish the Powerman Zofingen 2018 and show off in the most important race of the season.” The award “Duathlon Rookie of the Year” went to Jens-Michael Gossauer (Greifensee) at the Night of Duathlon in Oftringen, which was organized jointly by Swiss Duathlon and Powerman Zofingen. The Powerman Achievement Award, which is given every year to people who have achieved something extraordinary for duathlon sport, went to Raoul Voirol, OC President of the Powerman Tramelan (www.powerman-tramelan.ch), which was founded in 2018 and will take place this year on June 30. 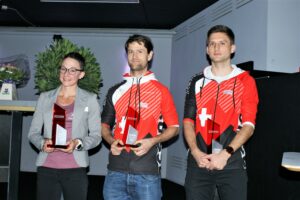 More than 100 photos of the Powerman Zofingen partner event can be found here: 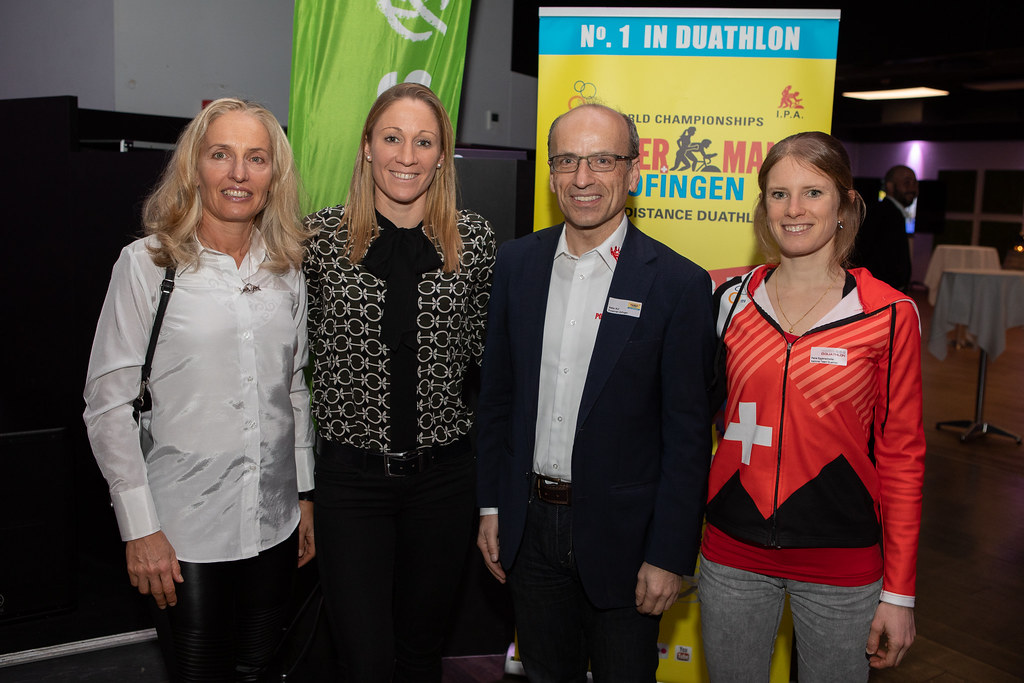 Diverse interviews at the “Night Of Duathlon”.