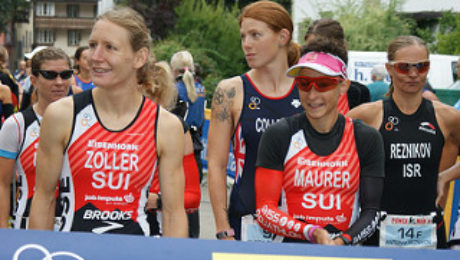 Swiss women’s double victory, French men’s double victory at the 2018 Zofingen ITU Powerman Long Distance Duathlon World Championships. At her comeback after a two-year absence, Petra Eggenschwiler from Solothurn wins in front of Melanie Maurer from Wikon, who lives in Bern. Place 3 goes to the Israeli Antonia Reznikov. The Frenchman Gaël Le Bellec will triumph for the third time in the men’s competition after 2014 and 2015. This time in front of his compatriot Yannick Cadalen and the German Felix Köhler, who lives in Basel. The Swiss men started very well, but then had to give up or fall behind. Freddy Nock from Uerkheim set his announced world record attempt of 25 hours in the wheel of death and earned great applause in the Powerman Arena. Seen over the entire Powerman Zofingen weekend, around 1,200 athletes took part in the 30th Powerman Zofingen, around 100 fewer than last year.

“I didn’t expect that in any way,” Petra Eggenschwiler could not even really claim her title at the 2018 Zofingen ITU Powerman Long Distance Duathlon World Championships. “I didn’t believe in winning until I started on the last 10 kilometre run. “The longer the race lasted, the more pain I had and I just hoped that I could hold out. For health reasons, the 30-year-old Langendörferin, who grew up in Laupersdorf, has not started at Powerman Zofingen in the last two years. “Somehow I regret this, but I have returned all the more successfully now.” Eggenschwiler attacked decisively on the last of the three 50 kilometre cycle laps and left her last tough rival, Melanie Maurer. The latter, who grew up in Wikon and now lives in Bern, was more than satisfied with the silver medal. “That’s mega and nobody expected a Swiss double victory. As I had problems running because of my stomach, I only hoped that the lead over the third placed athlete would still reach the finish line”. It worked out for Maurer. Finally, Antonia Reznikov from Israel took third place. Thanks to 4th place for Nina Zoller and 5th place for Daniela Schwarz, the Swiss team finished in four of the top five places – sensational. Among others, Miriam Van Reijen (NED), 2017 World Vice Champion and Nina Brenn, 2016 World Vice Champion (Achilles tendon problems) had to give up. Due to injury, Emma Pooley, a Briton living in Canton Zurich, who had become World Champion in Zofingen in the last four years, was not at the start.

Le Bellec, who had already become world champion in Zofingen in 2015 and 2014, divided his race and the forces very intelligently, let his two remaining rivals Yannick Cadalen and the German Felix Köhler, who lives in Basel, do the leading work, sometimes also attack. “I was able to keep up the rhythm I had set once, no matter what was going on around me.” The 30- year-old Frenchman only praised the new route:”I love it when it’s not just straight ahead, but up and down. By the way, the same double victory Le Bellac in front of his compatriot Cadalen already existed in 2014, and Köhler was very satisfied with third place: “I tried to stay on the bike and probably needed too much strength. In the starting phase, a number of Swiss players were in the lead. After that, one by one, or a lot behind. After a brilliant start Ronnie Schildknecht, Fabian Zehnder and finally Rolf Wermelinger gave in the course of the race. In the end, the Zurich hopeful Jens-Michael Gossauer was the best-ranked Swiss in 8th place. With Andreas Kälin, a second Swiss made it into the top ten.

Freddy Nock has contributed a lot to a great 30th Powerman Zofingen. The 53-year-old Uerkheimer set his 23rd world record. “Pain, feelings of tears, happiness and I’m proud to have done it and to have kept my promise to my son Leo.” The great father-son harmony was seen several times during the successful 25-hour world record on the death wheel. “A very big compliment to my colleagues at the IWTOA-WingTsun-King-Fu-D.B.-School Aarau for the great support during the world record attempt and in the weeks before the training”. This will have been Nock’s last world record attempt on the death wheel after setting the record at the RTL donations marathon twelve years ago, together with Joey Kelly, to 24 hours. “That was definitely the last record on the death wheel, but other world records are planned,” said Nock, who had toyed with the idea three times. No wonder, as Nock completed a total of more than 140 kilometres, i.e. more than three marathons. Twice during the world record attempt Natascha Badmann, ambassador of Powerman Zofingen, brought him bananas.

OC President Stefan Ruf drew a positive conclusion on Sunday evening. “I am highly satisfied. This was a sensational one from a Swiss point of view with the double victory with the women.” In fact, this happened for the last time in 2002 thanks to Karin Thürig and Ariane Schumacher or also in 2000 thanks to Natascha Badmann and Susanne Rufer. “I would like to treat Petra Eggenschwiler to the superior victory from my heart, as she has had a great season so far with various successes in mountain runs and long-distance races. Ruf was satisfied with the 1,200 participants. “We expected about 400 participants each over the short and long distance, at the CHARITY there were mainly fewer participants because the jumbo people were no longer present and we no longer bet on the celebrities”. The result was 100 fewer participants than last year and 200 fewer each than in 2016 and 2015. 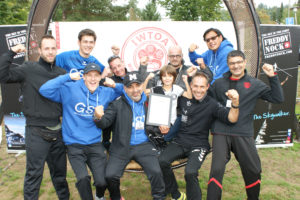 2.) Freddy Nock and his team after the successful 25-hour world record attempt on the death wheel. 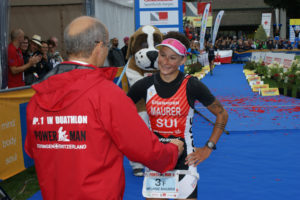 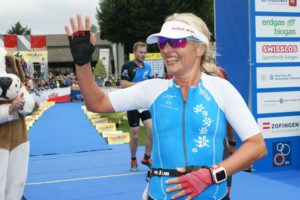 4.) Natascha Badmann, the ambassador of Powerman Zofingen, cut a very good figure on the short distance, had a lot of fun,  also made the fellow competitors and the fans at the roadside a great pleasure.

More pictures of the 2nd day of competition can be found at:

Like last year, it rained on the first day of the Powerman Zofingen weekend. In the faces of the participants, however, there was a radiance everywhere. This started with the Family Contest in the Expo Zone, with the exhibitors themselves, but above all also with the 220 or so PowerKids and the 150 or so participants in the

Powerman CHARITY, which took place for the first time on Saturday. With a smile on his face, Freddy Nock also completed the first hours of his 25-hour world record attempt on the death wheel. In the early evening the anniversary celebration 30 years Powerman Zofongen, in the evening then the Powerman party in the city hall Zofingen rose.

On the first day of the 30th Powerman Zofingen the children, the families, the CHARITY participants, Freddy Nock and the anniversary celebration were the centre of attention. At the 4th Family Contest various positions were on the program. The PowerKids races were attended by 220 children between the ages of 1 and 13, divided into five different categories. For the third time, the PowerFamily category (one parent and at least one child) was added, in which over 50 people took part. “Thanks to this category, among other things, we had a marked increase in the number of participants compared to last year,” said Fanny and Chiara Schaffner, who are responsible for the PowerKids races. “The great joy, the exemplary commitment and enthusiasm of the children are the reward for our work. There was stagnation in the category Youth and Beginners, which was implemented for the 3rd time, where only a handful of people took part.

This year’s Powerman CHARITY took place for the first time not on Powerman Sunday, but already on Saturday. This year, the proceeds of the Powerman CHARITY will go to the Spittelhof Zofingen, the “Think of me” foundation and the Swiss Muscle Society. While in the last two years there were about 200 people taking part, this year only about 130 people took part in the 5 km long fun run. Among them was Markus Bindschädler from Zofingen, who took part in the CHARITY for the first time. “I’ll run with my dog Borka and enjoy the 5 kilometers from A to Z.” With Oliver Imfeld, Secretary General of Powerman Zofingen, another very committed OK member took part in CHARITY: “I have to hurry, because the next tasks are waiting for me. “This is like my lunch break, so I can’t have much more than 20 minutes. Rothrister Kickbox-Crack, director and actor Kazim Carman also had to be quick on the CHARITY track, as he had to look after his Expo stand before and after. “I can handle the strain easily. I’ve already eaten three standard Kazim bars today.”

Freddy Nock on the Wheel of Death

At noon on Saturday Freddy Nock started his world record attempt in the north of the Powerman Zofingen Arena. A few minutes earlier, the world-famous Uerkheim high- wire artist ran to the toilet. “The nervousness is beginning to take effect.” The 22 world record holder was calmed down by his seven-year-old son Leo. “You can do Daddy. Besides, I’ll run the wheel of death with you once in a while.” As soon as Freddy Nock and his companions of the IWTOA-WingTsun-Kung-Fu-D.B-Schule Aarau were on the road again, he started with little tricks, mostly above the death wheel. “I take this liberty because 12 years ago I had much less freedom than here at the RTL donation marathon with the successful world record attempt over 24 hours.” Nock will have completed no less than three marathons by Sunday afternoon at 1 pm, not on a straight track, but on a bike that is constantly going up and down.

The 2018 Zofingen ITU Powerman Long Distance Duathlon World Championships will start at 8am on Sunday morning. The women are first, at 9 o’clock the men come to the course with the honorary starter Natascha Badmann. The World Championship program includes 10 running, 150 bike and another 30 running kilometres. The teams start at 9.35 a.m. At 9.45 am (women), and at 9.50 am (men) the start of the short distance duathlon takes place over 10 running, 50 bike and 5 running kilometres. Natascha Badmann can also be admired on the short distance course. A summary of the race and the decisive phase of the World Championship race will be broadcast live on TV 24 and Tele M1 between 2 pm and 4 pm. There is also a live stream from 8 to 16 o’clock, where you can follow the whole race. This on http://www.powerman.ch/de/live-race-reportZudem there is also a commented live internet stream on www.powerman.ch and www.powerman.swiss.

Click here for the live videos of PowerKids, Charity and Freddy Nock: 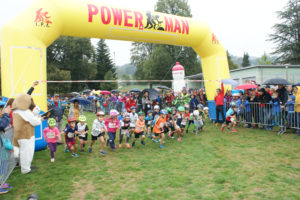 No. 1: On the first Powerman Zofingen day, the PowerKids flocked into the PowermanArena in great numbers. 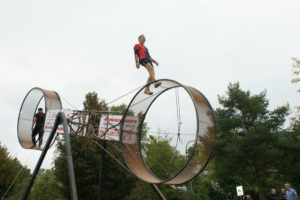 No. 2: Freddy Nock started his 25-hour world record attempt on the death wheel on Saturday at 12 noon right behind the Powerman Zofingen Arena.

No. 3: Natascha Badmann in continuous use: Freddy Nock is delighted that the six-time Hawaii and three-time Powerman Zofingen winner personally presented him with a banana.

No. 4: The start of Powerman CHARITY took place in the arena this time. 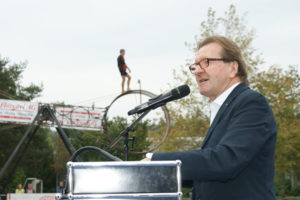 No. 5: The speech to mark the 30th anniversary of Powerman Zofingen was given by Zofingen’s city mayor Hans-Ruedi Hottiger in the arena overlooking the death wheel with Freddy Nock.